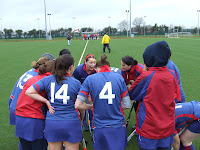 * St Brendan’s Phoenix Park Hockey Club will host kid’s hockey every Sunday in Laurel Lodge from 1pm until 2pm. The club will cater for boys and girls, beginners and more experienced players aged 7 to 16. For more information, contact Johnny Lowe on 087 646 2960.

* Former Trinity, Old Alex and Galway player Ciara Murphy has signed for Belgian-side La Gantoise for the upcoming season, linking up with a side containing two Argentineans and a number of Belgian internationals.

Another of her old clubs, Stade Francais have taken on one of Ciara’s younger sisters for the season, too. The club is coached, among others, by French legend Stephane Jacquet and is keen to open its doors for more Irish members who may be looking to visit France. If you are interested, email me at the usual address.

* Congratulations to Leinster referee, and friend of The Hook, Kris Cholewa who has become a father to a new baby boy, Kacper. It adds to a good year for Kris who earlier received international umpiring accreditation.