Pembroke 1 (Alan Sothern) Three Rock Rovers 1 (Mitch Darling)
Honours even as normal time once again could not separate Leinster’s top two from last year. Three Rock probably shaded posession but failed to create clear-cut chances while Pembroke will also hope to up the intensity when the IHL comes around.

Tim Hill hit the near post in the first half of an otherwise stale, midfield battle. Alan Sothern profited in the second from Michael Maguire’s howler, latching on to a loose pass, rounding the last man and firing in from the right wing. Gordon Elliott then hit a post before a tidy short corner switch with seven minutes to go was knocked goalward by the younger Maguire and Darling tapped in slightly before it went over the line. 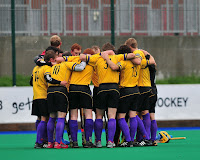 The game started with the rare sight of umpire Ciaran Bolger forced to don a Pembroke top, probably the one time in his career, as Pembroke’s yellow and Three Rock’s light blue clashed with the two different umpire’s jersies to hand!

Corinthian 3 (Brian Doherty 3) YMCA 1 (Phil Powderly)
YM let a first half lead slip as Brian Doherty zipped in three stunning short corner strikes in the second half to give John McInroy his first win. Phil Powderly’s improvised effort had the Y in front, on an eventful day for the player – he picked up a yellow in each half, two of four dished out on the day with Alan Blennerhassett also getting an enforced rest.

The second half was all Doherty’s, though, who now looks to head the line of impressive corner strikers at the club. 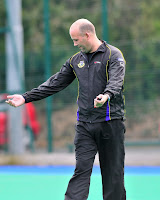 Paddy Gahan)
Fingal joined Glenanne as the two teams left with a 100pc record with co-coach John McInerney pleased his side had “won twice without playing too well” and is now looking forward to bigger tests to come in the next few weeks.

Adrian Sweeney got the only goal of the first-half but Stephen Thompson levelled from a corner for the Cats to be well in the game. For the second week running, though, they conceded soon after, Mick McGuinness converting a corner. Fingal blew several other set-piece chances on the day but finally made the game safe when Andrew Shekleton’s reverse cross was deflected in by Paddy Gahan.