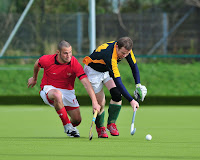 Glenanne 1 (Stephen Butler) Monkstown 1 (Gareth Watkins)
On a fascinating day of Leinster League action, Glenanne-Monkstown take the honours for most controversial game of the day. The bare facts are that Gareth Watkins’ second half goal cancelled out Stephen Butler’s drag-flick for a share of the spoils.

The main talking point was the bizarre situation following Ian Horsfield’s yellow card. His return to the pitch led to a major mix-up as Monkstown attempted a series of susbstitutions, the upshot of which saw two Town players onto the pitch with just one going off – leaving 12 players on the pitch.

The mistake was noticed after a couple of minutes, leading to captain Gareth Watkins having to serve a team yellow for the offence. Richie Beere was also binned, as the sky-blues finished the game with nine. Glenanne piled on the pressure in the closing stages with five corners but Dave Fitzgerald stood firm.

Other than that, the game saw chances at both ends, Monkstown’s mainly from play, the Glens predominantly from the set-piece. The visitors had some impressive spells of possession, especially early in the second half. Ian Allen hit the post from a penalty stroke on a memorable day.

Fingal 1 (Adrian Sweeney) Pembroke 1 (Alan Sothern)
Adrian Sweeney’s fifth in his last five games grabbed a point for Fingal with eight minutes to go in ALSAA. Sothern – with his fourth league goal – opened the scoring in the first half. He reacted fastest when his drag-flick was blocked down, striking in a reverse.
Fingal enjoyed some decent possession in the second half, in spite of Conor Connolly’s sin-binning, and finally got the reward from David Bane’s cross to Sweeney. Pembroke had a couple of late corners, though, to take the points but to no avail.

Railway Union 1 (Jeffrey Spillane) Corinthian 0
Railway defended stoutly to hold on for their first win of the season, withstanding several penalty corners at Park Avenue against Corinthian. Jeffrey Spillane (pictured) – currently involved with the Leinster U-16 panel – took a well-executed goal, latching onto Kenny Carroll’s long pass outside the 25, beat a man before steadying well before crashing in a shot for his first division one goal.

It proved the difference as Corinthian missed Brian Doherty – out with a bruised bone – at the set piece. Alan McKibbin was the first keeper to halt Corinthian’s progress before going off with a slight head injury. Patrick Jackman stepped in and kept the sheet clean.

Three Rock Rovers 2 (Phelie Maguire, Lucas Piccioli) Kilkenny 0
Rovers got top on their own this evening despite a poor performance, creating little against a compat and hard-working Kilkenny. Phelie Maguire got a touch to Peter McConnell’s drag-flick in the first half and Lucas Piccioli slid in for a second.

Around that, 16-year-old Gareth Smith was in great form between the posts as he stepped in place of Mark Sandall and Stephen Thompson was solid in centre-defence. Rovers will need to step up next week, facing Terrassa in Europe.