Scottish champions Kelburne claimed the Tempest Trophy with a 2-1 win over their Irish counterparts, Three Rock Rovers with Gareth Hall holding his nerve amid a goalmouth scramble with four minutes to go to score the winner.

The title never looked in danger as Rovers would have needed to win by eight goals to claim the trophy for themselves or beat Kelburne by three to give Cork C of I the trophy.

In a testy encounter, eight men were sent to the sin-bin, with the game reduced to nine versus nine for five minutes in the final quarter.

Josh Cairns gave the Paisley-side the advantage – his fifth of the tournament – after six minutes in by far the fastest game of the weekend with the Scots looking much more comfortable at the higher tempo. 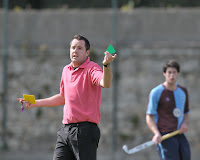 Rovers looked to force the pace too much with the numerical advantage but Ali Haughton had a great chance to level – his shot was saved off the line by Chris Nelson.

Peter McConnell was sent to the bin early in the second half before Cork Harlequins’ recruit Patrick Shanahan saw another shot saved off the line.

Another newcomer, Lucas Piccioli made it 1-1 in the third quarter, volleying home after a great thrust from Haughton.

Piccioli had the ball in the net, only to be awarded a penalty corner before Hall’s late winner was rapturously received in a game full of needle. 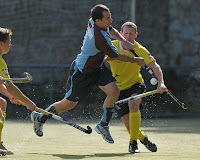 Earlier, Cork C of I gave themselves a chance of glory with an 8-2 thrashing of YMCA. John Jermyn scored four times with Alec Moffett hitting two and Karl Lynch – younger brother of international player, Jason – and Philip Smith completed the scoring.

For YM, Richie Margetson and coach, Ger Butler had put the game in the balance with first half goals.

C of I guest-keeper, Stephen O’Keeffe picked up the €500 bounty for the player of the tournament title and in the women’s competition, Old Alex sealed the title with a 5-2 win over Ards.