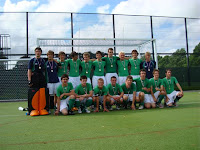 Ireland’s U-18 boys took the top spot on the podium when they beat England in the final at the U18’s four nations tournament in Cardiff, 2-1. Both goals came from precision penalty corner work one from Dan Hobbs and the second from Peter McDonnell.

It followed a comprehensive 3-1 win over Wales in the final group game on Thursday, with Ryan McCrea, Dan Hobbs and Stephen Sloan getting the goals.

Commenting on the final, coach John Hobbs said “I am delighted with our Boys performance, not only today but throughout the tournament. They set themselves high standards for which they continually raised the bar.

“The performances during the tournament indicate the improvement players have made since the beginning of the year, particularly during the past two months. The fact that we will lose only four players from this Squad augurs well for next year’ preparations for the European Trophy in Vienna July 2009.”

The Irish got on top of the final match early on, winning their first corner in the second minute, with a rebound flashing just wide. They had another pair of corners and enjoyed good possession but were unable to break the deadlock until the 56th minute. A perfectly executed switch move via McCrea and Smyth found MacDonnell to tap home.

Ireland doubled the lead with three minutes to go with a trademark Dan Hobbs drag flick high into the left hand corner of the net before England pulled one back on the final hooter.

On the girl’s side, Ireland finished on a high with two wins in two days to take third place, beating the Welsh 3-1 and 4-1.