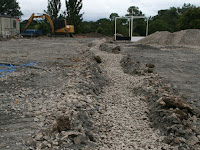 Botanic Hockey Club are waving a fond farewell to their grit pitch as they, in conjunction with St Mary’s Secondary School in Glasnevin, have just started work to transform their 33 year-old shale pitch into a state of the art, Tigerturf Evolution pitch.

The diggers moved in last Monday, August 11 and have set a proposed completion date of mid-November. The pitch itself will be of the modern hybrid variety, providing the benefits of a water-based pitch but without the water with Tigerturf having previously provided pitches for top English club Cannock as well as laying Astroturf for England’s Twickenham rugby ground.
Full planning permission came through in January of this year and word came through from that the pitch was ready to be worked on in early August.
The astro will provide hopefully provide a huge boost for the IHA’s Emerging Club of the Year and provide a great facility for the club, the school and the wider community.
The all-ladies hockey club based in Glasnevin, Dublin, Ireland was first established when Glasnevin Hockey Club, formed in 1973, and Maryfield Hockey Club united to form the Botanic in 1987.