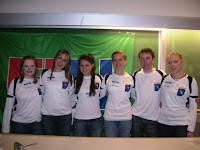 Amy produced a presentation on her ideas on how youth hockey could be developed in Ireland with her project, “Push Hit Slap, Bridge that Gap”, focusing on combating the drop out of teenage girls from the sport. It was based on the experiences of teenage girls in Naas Hockey Club last year when they played as part of a developmental team with two player-coaches within the senior section of the club.
The project looked at how to bridge the daunting gap between the junior and senior section of the club as at this stage many girls stop playing hockey. By focusing on why the youth players play hockey this initiative hoped to keep them involved in the sport at some level whether it was playing for the 1sts, coaching the juniors or playing social hockey.
It was found that girls are involved in the sport for social reasons as much as for the game itself so the club tried to bridge the gap between social and hockey with a trip away and an awards night.The festival aims to give the youth a voice, teach them about hockey leadership and create intercultural awareness and friendship and was an amazing experience.
Amy learned how diverse the hockey world is, sharing ideas with youth leaders from countries such as Barbados, Croatia, Germany and Hong Kong. During the festival the World Youth Hockey Promoter had to be selected. Amy’s presentation made it to the finals where along with the five other finalists she presented it to an international hockey jury. Nina Niedermeyer was awarded the title, with Amy finishing in third place.

Young is the second member of Naas to attend, with Jane Cronin’s project finishing in the top six finishers in Rosario, Chile in 2006. Belfast Harlequins’ Carl Allen also attended this year’s festival, finishing in top six. His presentation focussed on a comprehensi

Closer to home, at the recent Celtic Cup competition, held in Garryduff, Munster’s youth leaders (pictured) were honoured by the IHA for their efforts in a half-time ceremony.

The Hooks: Men's Player of the Year
U-16 Girl's finish fourth