The Irish Hockey Association announced today that star-player Iain Lewers has withdrawn from the Senior Irish Men’s team, effective immediately. Lewers has made the decision to make himself available for future selection on the Great British hockey team.

As a result, he will no longer be eligible to play any international hockey for the next three years. He will continue to play his club hockey with top Dutch club HGC in Holland.

Speaking to the Hook about his decision, Lewers said that he has taken this route in order to further his hopes of playing at the pinnacle of international hockey, namely the 2012 Olympics.

“I have ambitions and goals in hockey like everyone else, and I feel this is the best possible way to achieve these goals and aspirations.”

In doing so, Lewers is hoping to emulate two of Ulster’s finest – Jimmy Kirkwood and Stephen Martin (who is heavily involved in bringing the Olympics to London) – and compete for gold at hockey’s highest level.

But if the HGC player is successful in making the British squad for 2012, he will be the first player from this island to play in an Olympics since a ruling was made that Ulster players cannot play for both GB and Ireland.

The decision will be a major concern for the IHA, with Lewers believing that Ireland does not currently have what it takes to break into the world’s elite, despite recent improvements.

Asked whether he saw Ireland making the grade, he responded

“The answer to your question at this minute time is no, and that’s why I decided to make the decision I have. While I agree with a lot of people in Irish hockey that the current time has a lot of talent, I don’t believe that at the top end of high performance in Irish hockey that the structure is there to help give these talented players the best possible chance of qualifying for major tournaments. 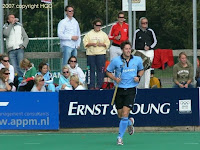 “Ultimately my decision can be seen as selfish, but you are not an international hockey player for too long and you have to make decisions which are best for you.”

The move is not without precedent in hockey’s recent past with Marilyn Agliotti playing initially for South Africa before taking a three-year hiatus and then getting selected for the Netherlands. Likewise, Laurence Doherty attempted to shift allegiance from Scotland to the Netherlands.

The latter spent three years attempting to naturalise, living in Holland and playing for Klein Zwitserland but found it hard to break into the Oranje squad but, after a struggle and a lot of time spent on the fringes, has now made the Dutch Olympic squad.

If all goes to plan, Lewers will qualify to play for England in international competition in three year’s time but says that this was an independent decision and was not approached by the English set-up to force his hand.

The case will, as such, mirror the break from international that cricket’s Ed Joyce took in order to qualify for an England call-up – though the fact Ireland play at the same level in hockey rather than having test status means that Lewers could well play his old colleagues sooner and more regularly.

Asked if he was concerned about the three year hiatus, playing with the European club runners-up should provide the sharpness he needs to develop. 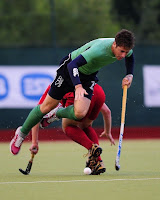 “Basically, I will not compete on an international hockey pitch for three years, then i will become available for England. However, in order to compensate for the lack of international hockey, I will be continuing to play in the best league in the world in Holland where every week is close to playing a international game. I feel by doing this it will give me the best possible chance to re-entering the international fold.

“I think it’s the risk you take as an individual if you are going to make these decisions. As long as you are aware of the possible outcomes of your decisions, and as long as you feel you have done everything possible to ultimately be selected then I think you can always justify your decision.”

A brave decision – it ultimately raises serious questions for the IHA to deal with, especially with the recent motion from DUP and Lisnagarvey man Alaistair Ross on the issue.