On a bizarre day of competition in Lisnagarvey, with matches delayed in ridiculous circumstances with picthes unable to watered and Pembroke having to warm-up three times for constantly rearranged start times, Glenanne were the big winners.

After Cookstown and Lisnagarvey drew, the Glens came from a 2-0 deficit to beat Rovers in the All-Leinster affair. A stunning counter-attack saw Mitch Darling completing an excellent move for the lead before Maarten Sier added a second from a drag-flick. 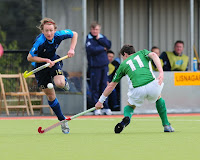 But there was to be no repeat of the 4-1 league result as Rovers indiscipline have three players sin-binned as the Tallaght-side put together a remarkable comeback. Paul Fitzpatrick put away the first from a quick free before Stephen Butler’s stroke levelled matters.

Gary Shaw then scored the winner as they survived a few late scares to get their campaign off to the best possible start.
Banbridge’s match with Cork Harlequins was delayed two hours as the pitches were unable to watered due to a lack of water to spray the two side by side pitches. 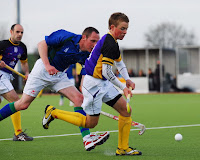 They played out a 2-2 draw while Pembroke’s match with Cork C of I was delayed until 7pm from it’s original start time of 4pm as the tournament was hastily rescheduled.