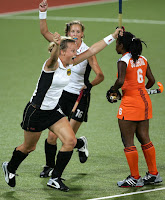 There’s a ton of ways to kill a day at work: take up smoking, take up working, play Stick Cricket, read the Guardian’s blog (which, let’s face it is directly where I ripped this off from). YouTube trumps them all. So here, to save you searching, are my favourite hockey clips. (To see part one, click here…) Add your own in the comments section, and everyone passes the day happily. And having done no work!

1) Christopher Zeller’s season with Bloemendaal in Holland was one of the most spectacular ever seen. It has been reported that they offered him a quarter of a million euro to stay with the club but he chose to join a German second division club along with his brother and the Wess boys. In tribute to his year in Holland, as they say in Big Bro, here are his best bits… and here’s a peach from their match against 2nd placed Rotterdam.

2) You all know about the All Blacks’ haka? Well, here’s the Black Sticks version: the hockey haka

3) Want to get an idea of the expertise of Ric Charlesworth ahead of the Hooked conference in January? Here’s an interview with him at the 2006 World Cup. And here’s the Indian side a year later smashing Korea in the Asia Cup final.
4) Perhaps this ad explains why we don’t take America (or their hockey seriously)
5) Check out this old-school Pakistani video, complete with long corners the like of which youngsters would never recognise. The goal from 4.55 in is amazing! And now to a more modern day Pakistani icon…
Seen anything on Youtube you think should be here… Have your say
EHL Last 16 draw to be broadcast live online…
Four players honoured by IT Tallaght