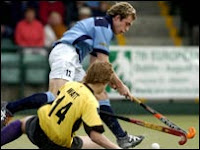 The most action-packed weekend of the hockey calendar – both Irish Senior Cups begin the business end of the competition this weekend with all the main players being introduced to the fray.
On the men’s side, an intriguing tie pits C of I against Lisnagarvey to take on one of their own. Former Munster-man, Jason Lynch now plies his trade in Hillsborough for Garvey who currently lie fifth in Ulster’s Senior League – trailing table toppers Banbridge by a massive 9 points after just five games.
C of I for their part have already overcome Harlequins locally and are averaging six goals a game, thus far. How much you should read into their local form, though, is hard to tell. Garvey, the most decorated ISC side of recent times will certainly be no pushover for whom Mark Robinson, Johnny Bell and Cameron Black all return.
Mark Tumilty, the Garvey coach is also glad to see John Jermyn is off his opposing team-sheet: “C of I are one of the top Irish teams, and we probably go in as underdogs admits but they are not as strong this season, now that John Jermyn is in Holland and Jason is with us. Jermyn’s influence was immense, not only in attack but from penalty corners, so we have as good a chance as ever of beating them.”
Locally, holders Glenanne against Corinthians should prove the toughest contest but the Glens still hold the mantle, for the moment, as the best team in Ireland in cup competition.
In the women’s draw, two young up and comers meet at Park Avenue, with Railway taking on Armagh. Mick McKinnon coached Armagh for seven years before moving to Railway last September and under his guidance the Northern club – which only emerged in the mid 90s – produced a number of current international names including Amy Stewart, Rachel Mulligan, Emma Stewart and Stephanie Quinn.
Pembroke Wanderers take on Loreto in a test of their new found credentials as a top-table side while Cork C of I ladies follow their men to Garvey.
ESB Irish Senior Cup 17th November
15.00 Railway Union V Armagh (Park Ave); 13.00 Randalstown V Ashton ( Antrim Forum); 14.00 Cork Harlequins V Ballymoney (Harlequin Park); 14.30 Lisnagarvey V Cork C of I (Hillsborough); 14.30 Victorians V Old Alex (UU Jordanstown); 14.30 Pembroke Wanderers V Loreto (Serpentine Ave); 14.45 Ards V Hermes ( Ards Leisure Centre); 15.00 Belfast Harlequins V Pegasus (Deramore)

The Draw For the ESB Irish Senior Cup quarter finals will take place live in Pembroke Wanderers , Serpentine Avenue at 16.45. The Draw for the Fourth Round of the Men’s Irish Senior Cup will also be announced at this time.
Who’s going through? who do you want to play in the next round? Have you say…
A comment about commenting
World news…