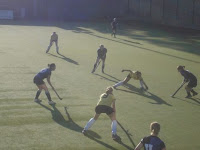 Pembroke took the outright lead at the top of division 1 with a rousing 4-0 away victory against Three Rock, moving them two points clear of Railway who drew with Leinster Senior Cup holders, Hermes. Hermes remain unbeaten but are four points off the pace, having drawn three matches so far. UCD’s match with Loreto was postponed due to their efforts in reaching the final of the Intervarsities.

* The Hook is looking to increase its coverage of Women’s division 1 hockey. Does your club have a contact who would like to supply information to the site? Email stevie_findlats@yahoo.com