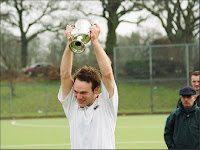 University of Ulster claimed the Mauritius Cup at the Intervarsities championship in Belfast today, beating UCD 1-0. In a game UU dominated, Neil Hamilton got the decisive goal. UCD were thankful to goalkeeper Herbie Bagnall for keeping them in the game and almost managed to nick a draw, gaining a series of penalty corners late on. Earlier, UU came from 3-1 down to beat defending champions Trinity on golden goal, while goals from Robbie McFarlane, Glenn Holmes and Michael O’Connor against CIT gained UCD their final berth. DCU, despite fielding internationals Phelie Maguire and the Harte twins could not make it beyond the group stages.