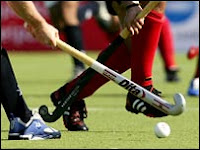 Irish coach, Dave Passmore has announced his squad’s plans in the build up to the Olympic Qualifying Tournament in New Zealand next February.

The senior squad start with a series in Scotland from the 23rd – 25th November as both Irish men and women travel to Stirling. Passmore is bringing a large squad in Scotland and using the games to assess players who could form the basis of the squad that head to Chile to play against South Africa and Argentina in from the 11th to 23rd December.

This four nations tournament “will provide the perfect climate and setting through which we will try to replicate the match pattern of the Olympic Qualifying Tournament, whilst training daily also” commented Passmore.

The squad travels to Chile, though, without several key players including Glenanne’s Stephen Butler and Graham Shaw due to work commitments.

The players return from Chile on December 23rd in time to spend Christmas at home before they head out to prepare and then compete in the Olympic Qualifiers. The squad will most likely spend up to two weeks in Australia on their way to New Zealand.

Four Nations, Santiago Chile
Warm up matches will be played on the 14th and 15th against Chile and South Africa. Details not confirmed yet.

The Best Foreign XI (Part One)
News in Brief…