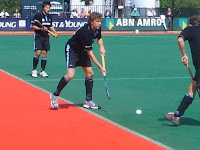 There’s a ton of ways to kill a day at work: take up smoking, take up working, play Stick Cricket, read the Guardian’s blog (which, let’s face it is directly where I ripped this off from). YouTube trumps them all. So here, to save you searching, are my favourite hockey clips. Add your own in the comments section, and everyone passes the day happily. And having done no work!

1) The original Youtube video, Shinty show off their skills not once but twice. Birmingham’s 18/13 club have a go as do some German kids. Dutch internationals Maartje Scheepstra and Ronald Brouwer give their more sedate, stylish version of ball-juggling.
2) Hockey played to perfection, Luciana Aymar scores, Maradona-style, against Korea, Ozzie Jamie Dwyer against Pakistan, Germany’s indoor side almost too quick for the cameraman at the 2003 World Cup and some of the best counterattacks.
3) Teun de Nooijer’s arrival on the world scene in the 1998 world cup final and then the best of the next ten years.
4) One of Times of India’s recent ads. Quite a poignant Bollywood-like emotional story of one generation’s dream fulfilled by another and then some classic images of the 8 times Olympic champions
5) Fancy yourself as an umpire? Think you know what’s a stick tackle and what isn’t? Here’s one interpretation.

European Championships – The Sportways Connection
Rough Guide to the Euro Hockey League – the future of hockey?